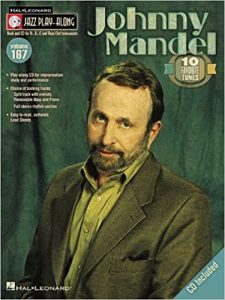 If you’ve listened to popular big bands, saw movies in the 1960s and 1970s, or have ever been anywhere near a television set, chances are good that you’ve heard at least one song by Johnny Mandel, the Oscar and Grammy winning composer and songwriter, who passed away at the age of 94 on Monday.

Mandel worked with jazz and swing artists throughout his career, and was known for his affiliations with Count Basie,  Frank Sinatra, and Peggy Lee among others.

He first turned to scoring films in the late 1950s, doing the music for “I Want To Live” in 1958, which got him nominated for the then brand new Grammy Awards. He would later win both a Grammy and an Oscar with co-writer Paul Francis Webster for “The Shadow Of Your Smile” from the film “The Sandpiper“, which became a MOR radio standard.

Today’s generation remembers Mandel best for writing the film score for director Robert Altman‘s 1970 anti-war film M*A*S*H; an instrumental of the closing theme from the film, “Suicide Is Painless” (original lyrics written by Altman’s then 14-year-old son Mike) , became the opening and closing theme from the multi-Emmy-winning TV series based on the film, which ran for 11 seasons and turned the song into a classic. He also wrote the haunting music from the classic Disney film “Escape To Witch Mountain” in 1975, which has always been one of my personal favorite scores.

Raise a glass and catch an episode of “M*A*S*H” and say a toast to Johnny Mandel. He will be truly missed by family, friends, and fans.

Here’s one of Mandel’s best, the theme from the aforementioned “Escape To Witch Mountain“: