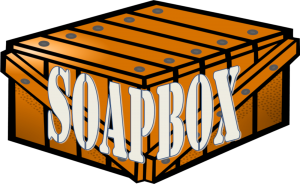 But there are those fans out there – they’ve been at this for close to if not longer than I have – who have a strict rule: “If it’s not on (LP, CD, etc), I won’t listen to it.”

Yes I do know that’s a very close-minded attitude to have in this age of digital music. But it’s also NOT a bad adage to live by, IF it pushes artists who only do digital to widen their horizons a bit.

Let’s face it – it is possible to produce both vinyl and CD these days for a relatively inexpensive fee compared to years ago. Some services, such as Bandcamp, help their artists do exactly that. Artists can also turn to Kickstarter, IndieGoGo, or Go Fund Me to put together funds to do physical media. And offer extra perks and incentives as well.

As a member of YouTube’s Vinyl Community, I see people all the time who refuse to listen to digital music as a rule, and they’re missing out on so many great artists I’ve come to know and love. I’ve tried and tried to get them to check the artists out, but they absolutely refuse to do so. And it really kills me because, as someone who has done digital music for most of the past two decades, I know what great music they’re missing.

Thankfully there are some artists out there who get the real importance of physical media. Take Sawyer Fredericks, for example. People who became his fan either by hearing his earlier music or by catching him when he was on NBC’s “The Voice” have mostly stayed with him, and he knows that not all of them are digital-exclusive. He’s made sure that all his albums are out on CD, and his first two albums, “A Quiet Storm” and “Hide Your Ghost“, were also released on vinyl. That’s HELLA important these days, with the huge resurgence in vinyl.

Contrast that with one of my favorite artists currently out there, Luke Mitrani. Mitrani’s music is heaven sent, and I adore his off-beat lyrics and his off-kilter style. But he has made no move to release his music on physical media AT ALL – no CD, no vinyl – and he’s not going to be able to reach the throngs of people who might otherwise become a fan because of it, and it’s a damn shame.

If you are on vinyl or CD, and can get even ONE member of YT’s VC to talk about your album, chances are you’re going to see a small increase in sales, because other members of the VC want to know what you’re talking about and want to hear it for themselves. So in many cases, they’ll go out of their way to find the vinyl or CD you’re talking about and give it a spin themselves. And if good word of mouth spreads…who knows?

I have a bad feeling this could also happen in the near future to a musician I think has the potential to be a breakout star as a musician – AEW wrestler Marko Stunt. In addition to being a hoot to watch in the squared circle, Stunt is an accomplished singer and songwriter and is presently putting together his first EP, which he hopes to have out later this summer. However, I do not believe he’s planning to put it out on any kind of physical media, and that could greatly inhibit his chances of exploding musically. Stunt’s music falls into the modern singer/songwriter vibe, his voice is glorious to listen to, he writes incredible lyrics, and overall, if he can get the word out there, I have no doubt he could be an even bigger star in music than he’s already become in professional wrestling. His music already has a following on his Twitch stream (on which for some inane reason, he keeps deleting old videos – STOP DOING THAT, MARKO!  Your paying subscribers are just that because they want to see the old stuff too, dude!), but even with his huge following on Twitter and Instagram, it’s not going to get him as far as it could – more than anyone else right now, he needs physical media to truly explode. And believe me, he’s no less talented than people like Ed Sheeran or Lewis Capaldi and could be standing right there with they and others if he plays his cards right – and that includes PHYSICAL MEDIA.

So to the artists I love who have thus far stuck strictly with digital media – Mitrani, Stunt, and others – in this day and age, no matter how practical it may see, you CANNOT ignore a whole section of the audience. Find some way to pull things together and release your music on CD or Vinyl – not only will you be glad you did, it will make it far easier for those of us who love your music and promote your work to do so to those stubborn people who refuse for whatever reason to listen to any kind of digital-only release.